One of the most impactful team building activities we do is what we call an acknowledgment exercise.

In this case, we're talking about the 2nd definition - expressing appreciation or recognition. How many of us have that happen too many times in day? How often do you go home and say "my colleagues were just overly effusive and grateful today for everything I did.. I just can't handle anymore gratitude or appreciation".

What might happen if, you took just one meeting to step back, slow down, and acknowledge yourself and others on your team? In our experience, if done with care and in an authentic way, this one activity can drastically shift the mood of a team.

The key questions in this exercise are:

1. What I bring to the team is.... (what is your contribution to the team; not just your skills, but your essence or character?)

2. What my team appreciates about me is... (each team member has a chance to acknowledge your unique contribution)

Though this is a relatively straightforward process to setup, it is important that the facilitator or leader of the activity believes this is something of value for the team. The others on the team will sense this.

Once the tone is set by the leader, there doesn't need to be a lot of preamble. Set the context for how this practice connects to what you are trying to accomplish as a team. Generally, this practice helps to create connection and build trust among the team. It also helps set a positive emotional tone for the team which supports ambition and innovation (generally it's not necessary to state this explicitly - let the team engage in the activity and notice for themselves how the emotional tone of the team shifts).

After you set the context:

1. Have the team form groups of 4-5 with the people they work most closely with (though any combination is fine). It often makes sense for the leader to join a relevant group.

2. Hand out a piece of paper with each question on it and some white space for notes.

3. Identify a someone who will watch the time.

4. Someone in each group can volunteer to go first. That person spends 1 FULL minute answering question #1: "what I bring to the team is....". Emphasis is on their character over skills.

This will be hard for many people. We encourage the group to be patient for the entire minute and continue to let them try to talk.

5. Person #1 should hand their paper to someone else in the group to scribe. Then, each person in the group should spend 1 full minute answering question #2: "What I appreciate about you is..." Again, with the emphasis on character over skills.

Remind the team that it's important to speak directly to the person, not about them. The scribe will take notes and each person takes that sheet home with them.

Continue the process until each person in the group has gone. So if there are 5 people in the group, it will take a total of 25 minutes to complete the activity.

As a facilitator, it can be tempting to step in and try to direct the conversation. In our experience, it's best if you set this up and get out of the way. If you are part of the team, step in and participate in the process. Let the team have their conversation however it unfolds and make sure to leave time for them to debrief with each other or stay in the conversation if they need more time.

It's easy to focus on what's not working - particularly during times of overstress. Once a culture of complaining or triangulating kicks in, it tends to spread and negatively impacts the mood of the team or organization.

If we can shift the focus to what's working well and what we appreciate about ourselves and others, that can have a drastic impact on the mood of the individual and team to one that is more conducive to ambition and action.

Further, the process facilitates an environment that supports effective communication and builds trust among team members.

Acknowledgments can become a practice that you use on a consistent basis on any team. It can also work well in times when you notice people seem particularly focused on the negative and are starting to complain about "them". As a leader, you might not hear specific complaints or "gossip" but if you pay attention, you'll notice the tone or emotional state of your team.

I once stepped into a new role who's previous director had created a toxic environment. The team members had once been close friends and were currently under a fair amount of pressure to accomplish some hard tasks and were all feeling "stuck". Instead of focusing on the work, they started complaining about each other, talking behind peers backs, and forming sides.

I introduced this acknowledgment exercise by putting them in groups with the people I knew they were most frustrated with in that moment. Though they were initially a little resistant, after letting them sit with it for a bit, they eventually started talking to each other. Pretty soon they were smiling, laughing and reconnecting with each other. They'd forgotten that they actually enjoyed and valued their team members and had simply gotten focused on the wrong things.

This can work equally well at home with family members. We've done this with our son in a different way. We were starting to feel like "don't" machines.. "Kieran, don't be mean to your dog...Kieran, stop skateboarding in the house... Kieran don't jump on the furniture.." When we realized what we were doing, we starting putting post-it notes on the fridge with acknowledgments instead  "Kieran, I love the way you helped make breakfast this morning... I love the energy you bring to our family.... I'm proud of you for..."

Even on the most challenging days, this practice shifted our focus to what was going well and what we enjoyed most about our son. Pretty quickly, we noticed a shift in him and us. The more we focused on what we enjoyed and the more positive behaviors we acknowledged, the more those started showing up. What a shift in the emotional tone of our household!

Another activity you might enjoy is our team scorecard assessment: 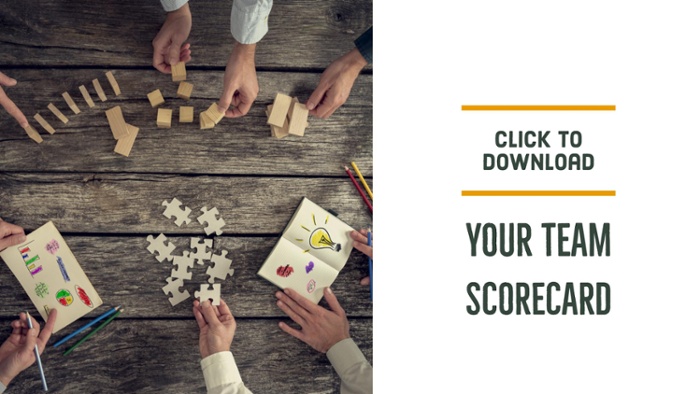 be your most powerful in the moments that matter